As of today robot has been widely used in industrial field: their use for assembly operations has allowed to significantly reduce costs while improving the quality of production. 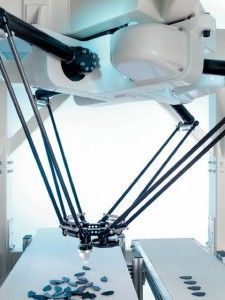 We offer flexible solutions for packaging and assembly application, constantly looking for advanced technologies in order to guarantee efficient and reliable machines.

System performances can be verified in advance thanks to simulation tools.

Industrial robots main feature is versatility: robots can do different tasks and can adapt to environmental changes through simple software changes.
Since the development of SCARA robots, operators have been replaced by robots in many applications where repetitive, heavy and dangerous tasks were needed. In the 90s, with the development of force, vision and tactile sensors, industrial robots have been used for quality controls, fragile objects (such as glass objects) handling, precision works such as pieces finishing or tasks that are tough for human being.

In order to evaluate robot performance, some parameters must be taken into consideration. The first parameter is accuracy, which is the difference between target position and achieved the achieved one. The stricter the tolerances limits are the more accurate feasibility analysis must be. A second parameter is repeatability, which indicates the variation between the positions achieved in different cycle. Finally, spatial resolution is the minimum distance which can be controlled or detected.
When heavy objects are handled it must be determined the maximum payload that allows to maintain accuracy target. Finally, it is necessary to calculate cycle time, ie the time required to perform a pick and place cycle.

To instruct the robot to perform several tasks in a sequence it’s required a programming language. Different levels of interaction are available, according to the chosen language.

Following the technological improvement, robots have become the most viable alternative to the delocalisation of the past years. Robot manufacturers design new models suitable for new industrial applications every year.
The massive production of computer hardware has determined robots success: they have been widely used for computers components assembly: memory circuits, chips and other various parts to obtain the finished product. The mass production of these products requires high precision and high speed that are guaranteed by robots.

Robots use on the automotive industry is also widespread as they can perform several hard oeprations with high accuracy and repeatability.

Robots are also widely used in hard environments where operators are too much exposed to danger, they are also used in delicate and clean room.

The robotics industry has changed over the years: they are no more operator substitutes, they have been designed to solve all those applications that are too risky for workers or which require high accuracy; robots guarantee high productivity even in the hardest situations.